Singapore's newly acquired Gulfstream 550 Airborne Early Warning (G550-AEW) aircraft became fully operational. The G550 aircraft uses one of the world's most advanced radar and communications systems to detect aerial threats. It has a detection range of more than 200 nautical miles. Today also see the commended the work of the 111 Squadron (RSAF Sqn 111), also known as the Jaegers, which operates the G550-AEW aircraft. 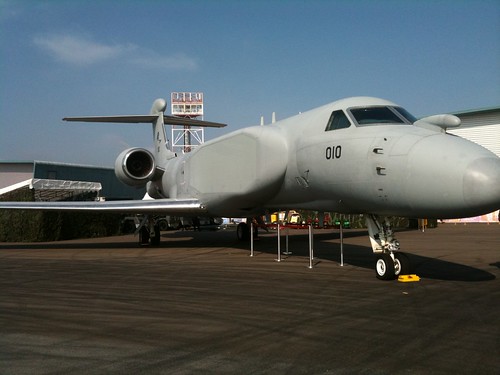 These surveillance jets went operational on Friday - sharpening the SAF's 'eyes-in-the-skies' capabilities so that warfighters can see better and further, to pre-empt the enemy. The G550-AEWs, together with the RSAF's fighter squadrons and Ground-Based Air Defence units, are a powerful network that represents a quantum jump in the SAF's (Singapore Armed Force) ability to identify potential aerial threats early and respond decisively, in peace or in war. The G550 can fly faster, higher, longer and seeing farther than the E-2C Hawkeye, decommissioned in 2010, which it replaces. The G550-AEW can stay in flight for nine hours and climb to 41,000 feet (or more than 1200 metres), compared to the six hours of endurance and a maximum altitude of 35,000 feet of the older E-2C Hawkeye.