Singapore founding father Lee Kuan Yew (LKY) has resigned from the country's cabinet, ceding leadership to his son, Prime Minister Lee Hsien Loong. LKY has been sitting inside the cabinet for the last 52 years. The move comes after his political party's worst election result since 1965.

Mr Lee will retain the parliamentary seat that he won (uncontested) in the general election on 7th May 2011. He will continue to show his presents from the backbenches of the parliament. He once said 1988): “Even from my sickbed, even if you are going to lower me into the grave and I feel that something is going wrong, I will get up. Those who believe that after I have left the government as prime minister, I will go into a permanent retirement, really should have their heads examined." Mr Lee was once a supreme electoral asset, however younger Singaporeans do not remember his glory days. 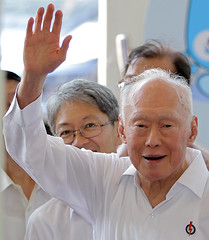