Teo Chee Hean will be Home Affairs Minister (Immigration/Foreign Talents), Khaw Boon Wan will become National Development Minister (Housing) and Lui Tuck Yew will be Transport Minister (SBS/MRT/COE). According to most Singaporeans, these there were the worst performing ministries. With an incredible lot of damage have been caused and a lot more of tidying up the mess needs to be done. However many also felt that the change came too late, as the damage has already been done. 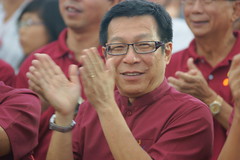