The airspace was shut down last night when two missile-armed Republic of Singapore Air Force (RSAF) F16D jets were scrambled to intercept a civilian plane heading here without an approved flight plan. The fighter jets went into action at 6.42pm and intercepted the single-engine turboprop Cessna 208 Caravan Amphibian (a float plane able to land on water) and escorted it to land at Changi Airport. The resulting lockdown of Singapore's airspace triggered by the intrusion affected 17 inbound flights, which were forced into holding patterns. Six departures were delayed.

The Republic of Singapore Air Force (RSAF) Air Defence and Operations Command tracked the small plane as it flew towards Singapore, and it was quickly established that it did not have an approved flight plan - a 'red flag', especially since the Sept 11, 2001, terrorist attacks in the United States.

Investigation showed that the plane was bought by Ms Mary Cummins, who co-owns Kimberley Extreme (a tourist adventure flight company) with a former pilot with Australian airline. Her company is based at Broome Airport in Western Australia. The Singapore Police Force detained the two Australians (Mr Rhys Thomas, in his late 50s and his passenger, Mr Darren Johnson, a flight engineer in his 40s) who were in the plane are assisting with investigations. 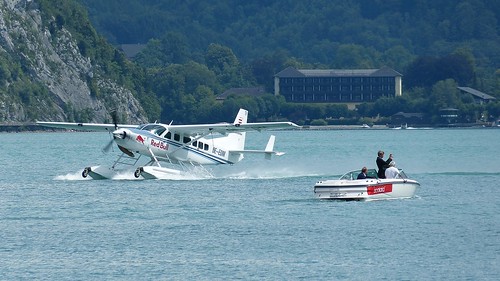