A black panther escaped from captivity. This escape set off a massive hunt by the Singapore Armed Forces (SAF) in the Seletar-Mandai Road area. The three-year-old panther, acquired from Thailand just six days earlier, was one of three at the zoo which was scheduled to open the following month. It was reported missing the previous evening by the zoo keeper. Thousands of soldiers cordoning off the forest reserve and searching for month but gave up. Months later to the shock of a shipyard worker, he saw a huge black cat in one of his unfinished tankers at the shipyard in Tanjong Rhu. The authorities were then called in and the zoo officals promptly "captured the cat". Actually the frighten panther got itself trapped in a tank.

A black panther is a large black cat. Black panthers are (melanistic) color variants of several species of larger cat. Wild black panthers in Latin America are black jaguars (Panthera onca), in Asia and Africa they are black leopards (Panthera pardus), and in North America reported black panthers may be black jaguars or possibly black cougars (Puma concolor – although this has not been proven to have a black variant), or smaller cats.[1][2] Black panthers are also reported as cryptids in areas such as the United Kingdom and Australia, and for these (if they do exist) the species is not known. Captive black panthers may be black jaguars, or more commonly black leopards. Black panthers have sometimes been regarded as forming different species from their normally-colored relatives. The name "panther" is often limited to the black variants of the species, but is also used to refer to those which are normally-colored for the species (tawny or spotted), or to white color variants: white panthers. 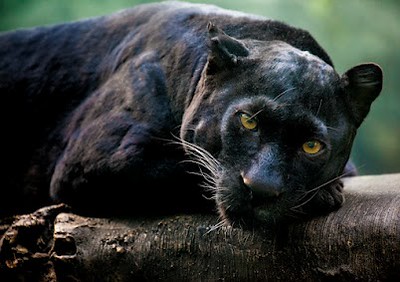