The new RSAF 144 Squadron, "Black Kites", was formed to welcome the arrival the age of the supersonic jets in Singapore. The Squadron 144 will be home of the new F-5 supersonic jet aircraft. The squadron commander is LTC Michael Teo and will be used to conduct F-5 operational conversion course (OCU) of pilots. LTA Eng Jee Leong, LTA Peh Teng Keng, LTA Sham Chee Keong, LTA Teo Shi On and LTA Lee Chang Rhen were the first batch of pilots to be converted here. 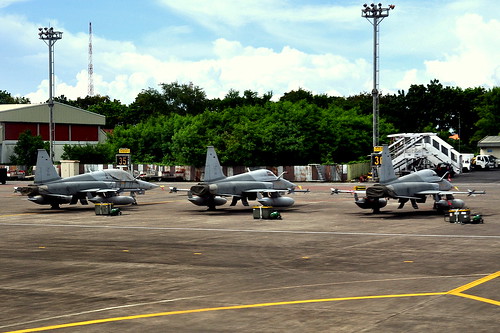 The Northrop F-5 Freedom Fighter and the F-5E Tiger II are part of a family of widely-used light supersonic fighter aircraft, designed and built by Northrop. The F-5 started life as a privately-funded light fighter program by Northrop in the 1950s. The first-generation F-5 Fighter entered into USAF service in the 1960s.

Singapore RSAF F-5E/F variant, first ordering the aircraft in 1976 with delivery of this first batch of 18 F-5Es and 3 F-5Fs was completed by late February 1979, equipping the newly formed-up No. 144 "Black Kite" Squadron at Tengah Air Base. At the end of 1979, an order was placed for six more F-5Es, these were was delivered by 1981. Making it a total of 27 new F-5 in the RSAF inventory.