200 people gathering at the Seletar Aerodrome to welcome the arrival of Miss Amy Johnson, age 27, in her de Havilland Gypsy Moth aircraft en route to Australia. Amy became the 1st woman aviator to fly solo from England to Australia. 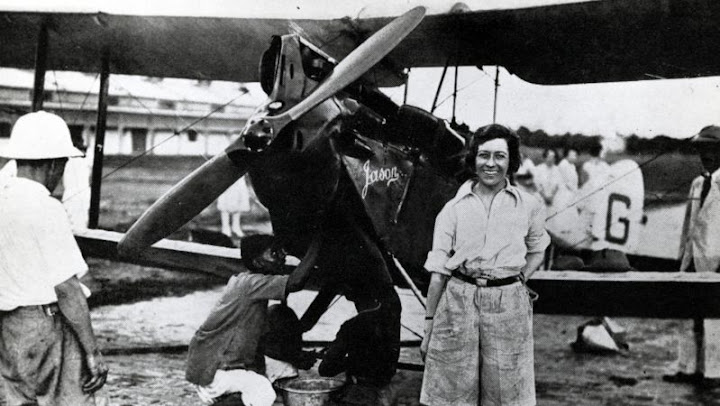 Ms. Amy Johnson (1903~1941) was introduced to flying as a hobbyist in the winter of 1928. Despite being told that she would “never make a flier”, she persisted under the tutelage of the London Aeroplane Club’s Captain Valentine Baker. Not long afterward she became certificated as a private pilot (“A” License) on July 6th, 1929—five days after her 26th birthday. Within the same year she also became Britain’s first female qualified ground engineer, receiving her “C” license in December. Unable to find work as a pilot, Ms. Johnson decided to undertake some kind of record-breaking flight, in order to demonstrate that women could handle the complexities and demands of aviation as well as men.

Update: On 5 January 1941, Amy Johnson was flying an Airspeed Oxford for the Air Transport Auxiliary from Blackpool to RAF Kidlington near Oxford. Miss Johnson went off course in adverse weather conditions. Reportedly out of fuel, she drowned after bailing out into the Thames Estuary.