A two million dollars red Ferrari 599 GTO, one of Ferrari 's fastest-ever road car, beat the Red Light at Rochor Road and Victoria Street Junction and crashed into a passing blue Comfort Hyundai Sonata Taxi. The impact was so great that parts from both cars, including the engine block of the taxi, was scattered all over the road. The 4.15am accident killed the male driver, a wealthy 30-year old Mainland Chinese National from China's Sichuan Province, the 50-year old local taxi driver and a 40-year old female Japanese passenger riding the taxi. Two other people were injured.

The injured was the Ferrari driver's 20-year old girlfriend (a Mainland Chinese studying in Singapore) and a passing 30-year old local motorcyclist. The blue taxi was heading towards Bukit Timah from Changi Airport, while the red Ferrari was driving along Victoria Street towards Raffles Hospital from Chinatown. Anyway, the path that the Ferrari was on is a dangerous stretch of Victoria Street. The pedestrian crossing is less than 75 metres away from the busy junction. The pedestrian crossing lights is often misread as the main traffic junction lights. The Chinaman driving his new Italian sports car probably saw the "green" light of the pedestrian crossing, thought the road was clear to go and continued to driving into crossing. That may have caused this tragic outcome!

The crash was captured by a dashboard-mounted camera on a vehicle that was just moving behind the blue taxi. Watch the actual crash footage here and in slow motion here. From the clip, we observed that it took the red Ferrari 0.5 to 0.8 seconds to cover a distance of about 15 meters or a speed of between 100 km/hour to 110 km/hour. In a 60km/hour speed zone? 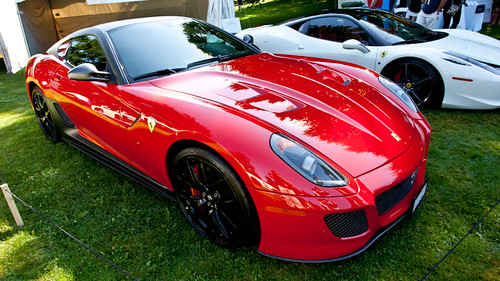 There is only a couple of this exclusive $1.8 million dollar front engine limited edition Ferrari GTO (Gran Turismo Omologata) specials in Singapore. Designed on the platform of the production Ferrari 599 GTB, but developed to offer the ultimate performance. The 599 GTO is a record-breaker, having set the fastest-ever time by a road car around the Ferrari test track. Ferrari 599 GTO performance comes from the 5,999cc engine delivering 670 hp V12 powering this 1495kg car is a 0-100 km/h acceleration time of just 3.35 seconds, as well as a top speed of over 335 km/h. This was a limited edition car, only 599 cars were build by Ferrari factory in Italy. The Ferrari in this accident, SKC922T, was so badly damaged and probably has to be scrapped just like the other Ferrari that was totaled by an ex-SLA man.

The fifth generation Hyundai Sonata is a full-size car manufactured and marketed by Hyundai Motor Company. Sonata engine is a 2,400cc engine delivering 164 bhp (122 kW) at 5800 rpm. The diesel version was used as a taxicab in Singapore. The blue Comfort taxi, SHC1042G, has to be scraped too as its engine was dislodged from the car and tumbled forward for about 30 metres from the point of impact.

In an outpouring of kindness marked the wake by the member of the public. They paid their respects and made donations to help the family of cab driver, Cheng Teck Hock, who died in on Sunday evening. Comfort, the cab company, starts donation drive for family of cabby. Meanwhile, for those who want to help the Chengs, cash donations can be dropped off at the cashier located next to the general service counter on level 1 of Comfort’s office located in Sin Ming during office hours (Mondays-Fridays, 8am - 5.30pm) by end of this month. Members of the public can also make cheques payable to "LIM CHOO ENG" and mail them to: THE CHENG FAMILY, c/o Comfort Transportation Pte Ltd, 383 Sin Ming Drive, Singapore 575717, Attn: Customer Service Centre. Donors should indicate their names on the back of their cheques.

The crash fuels Singapore anti-foreign sentiment. Local web forums were swamped with postings attacking Chinese and other foreigners. Disgruntled locals seized on the incident as another reason to attack the government's immigration policies and the presence of more than a million foreign workers and professionals in the over-crowded Singapore.

1 Nov 2012 Update: Five months after the accident, more details emerged at a coroner's inquiry. Mr Ma Chi, aged 31, picked up his girlfriend Miss Wu Wei Wei (another China National), aged 21, from a nightclub in Clarke Quay at 4am. About 15 minutes later, at 4.15am, Mr Ma's red Ferrari, which was found to be engaged in "race" transmission control mode, beat a red light which had changed to red for 5 seconds before the impact. His speed was 178kmh, according to data logged in the in-vehicle computer of his car. The inquiry also heard that no alcohol or drugs were found in Mr Ma's blood and there were no reports of traffic light malfunctions at that junction that day. Mr Ma Chi was a Managing Director of his own software development and service company, Techaccount (S) Pte. Ltd., UEN200901364K.