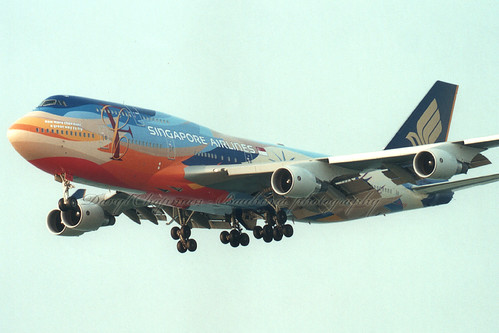 The airport cleared the aircraft to takeoff at 05L (Left). However the crew attempted takeoff on runway 05R (Right), which had been closed for repairs, instead of the assigned runway 05L (which runs parallel to 05R). The captain, Foong Chee Kong, correctly heard that he needed to take off at 05L, but he turned 215 metres (705 ft) too soon and lined up with 05R. The airport was not equipped with ASDA, a ground radar which allows the airport controllers to monitor aircraft movements on the ground.

Due to poor visibility in the heavy rain with a gusting winds of up to 50 knots across the runway, and obscuring visibility as rain lashed through the darkness, the flight crew did not see that construction equipment, including two excavators, two vibrating rollers, one small bulldozer, and one air compressor had been parked on runway 05R. In addition, the runway contained concrete jersey barriers and pits.

As the aircraft was taking-off, it collided with the machinery and broke into pieces. The fuselage was torn in two, and the engines and landing gear separated.

Update: A few days after the incident, SIA had offered US$20,000 to each survivor, while for every passenger or crew member who perished, SIA had offered US$400,000 to their families. However, many rejected the offer and sued the airline. A total of 40 lawsuits (26 involving passengers and 14 involving crew members) were filed against SIA in Singapore, and more than 60 passenger lawsuits were filed in the United States. All were settled out of court by October 2006.

Update: After the accident, other SIA aircraft painted with the promotional livery were repainted with standard Singapore Airlines livery. No special promotion livery has since been introduced.

Update: Runway 05R has been converted to taxiway NC and runway 05L has been renamed to runway 05.

Update: Singapore Airlines changed the flight route designation to SQ030 immediately after the incident, and then later to SQ028. The TPE-LAX route was operated by Boeing 777 aircraft until 1 October 2008. SIA the flight to SIN-NRT(Narita)-LAX as SQ12.

Update: Taiwanese investigator found the three pilots for possible negligence but did not pursue any criminal charges against them. They recommended in July 2002 that two of the pilots, Captain Foong Chee Kong and First Officer Cyrano Latiff, have their licences suspended, perform 240 hours of community service in Singapore, and not fly into Taipei for one year. SIA immediately fired the two pilots. In October 2002 the Civil Aviation Authority of Singapore announced that the two men could register to have their licences reinstated. The third pilot, First Officer Ng Kheng Leng, who faced no charges as he was not at the controls that night and continued working for SIA.

Update: After having his contract terminated by SIA in 2002, Cyrano Latiff joined Lufthansa as an aeronautical consultant for two years. He then ventured into the food and beverage industry before becoming a lecturer for the Diploma in Aviation Management & Services at Temasek Polytechnic’s (TP) Engineering School in 2008.

Update: Captain Foong Chee Kong, a Malaysian, when on to fly for Air Asia.