Myanmar's democracy icon and opposition leader Aung San Suu Kyi is in Singapore to deliver a lecture on leadership at the Singapore Management University (SMU). Respect is something the 600-strong crowd of students, academics and business leaders clearly had for Suu Kyi. She said "Leadership is not about being popular all the time. Sometimes, leadership means accepting that what you do may be unpopular and may well lose you the next elections. But if you truly believe that what you are doing is good for your country, you must be prepared to lose the next elections."

This was the first official visit by Aung San Suu Kyi to Singapore. In the following press conference, the Nobel Peace Prize laureate was complimentary as well as critical of her hosts. Asked what she saw in Singapore that she might like to recreate in Myanmar, Ms Suu Kyi responded: "I don't think 'recreate' is the word, 'learn' yes." Even as she seeks to learn from Singapore. She irritated that her country should not copy them wholesale. 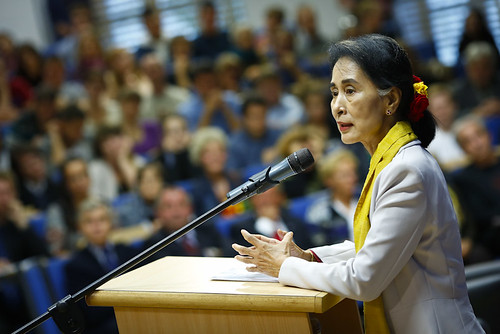 Aung San Suu Kyi was one of the world's most prominent political prisoners. She is a Burmese opposition politician and chairperson of the National League for Democracy (NLD) in Burma. She was under house arrest in Burma from 1989 to 2010. Political leaders around the world has been flocking to Yangon (Rangoon) Myanmar to visit her after she was released. Suu Kyi received the Nobel Peace Prize in 1991. 2012, Aung San Suu Kyi won the vote for a seat in Parliament in a by-election.