The first batch of about 300 RSAF personnel and their families leaves for Pearce, Australia. They include pilot-training instructors, ground crew and technicians. These RSAF personnel are there to manage and support the Singapore Basic Wings Course.

Pearce Base was because of the advantages offered in terms of its proximity to Perth (40km from City, about 40 minutes drive time) with its international airport, its climate which is conducive to flying training, and the already established flying training environment.

The 16 of the 32 RSAF SIAI-Marchetti S.211 aircraft arrived by ship from Singapore via Fremantle Port. The aircraft were transported complete with wings on low loaders on the weekend of 18/19 September 1993. And within a month, the RSAF flew in excess of a total of 6000 flying hours. 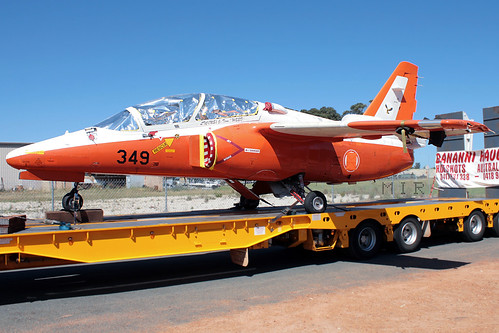 RSAF Flying Training Institute (FTI) at Base Pearce has adopted an outsourcing programme which has increased cost effectiveness. Under a contract awarded through the MINDEF Public-Private Partnership (PPP), Lockheed Martin has been providing the RSAF with a training package using the PC-21 trainer aircraft. They also supply and maintain the fleet of PC-21 trainer aircraft and a suite of ground-based training systems.

Training in Australia and other overseas locations allows the RSAF to overcome airspace constraints in Singapore. The RSAF signed a Memorandum of Understanding with the RAAF to establish the FTI at RAAF Base Pearce earlier in March 1993.

Background: One of the main problems faced by the RSAF, partcularly it's flying training units, has been an acute shortage of airspace over Singapore for which to conduct regular flying training. Measuring roughly 600 square kilometres in area and a thriving economy with 5 very busy airports. This naturally places severe restrictions on airspace and has led to stringent Air Traffic Control (ATC) procedures. The problem is partially alleviated by agreements allowing limited usage of the airspace of neighbouring Malaysia and Indonesia, and although this partially alleviates the problem, low-flying RSAF aircraft have been a regular source of friction between Malaysia (mainly the southern state of Johor) and Singapore. This, coupled with heavy rainstorms during the monsoon season between November and April which makes flying all but impossible. This constraints has prompted the RSAF to search overseas for a location to base it's Flying Training School (FTS), and RAAF Pearce, Western Australia was chosen for its virtually unlimited airspace and year-round clear weather. Western Australia was reckoned to be considerably superior to Singapore as a place to train Singapore's pilots.