The Singapore Youth Flying Club (SYFC) was established in December 1971 as the Junior Flying Club (JFC) by the then newly-formed Singapore Armed Forces (SAF). Its mission is to promote aviation among youths and inculcate in them a strong passion for flying. This is done through its aeromodelling courses for secondary school students and flying training for JC and Polytechnic students. Its vision is to be a world class aviation training centre for youths and it strives to develop them to take up a career in the Republic of Singapore Air Force. 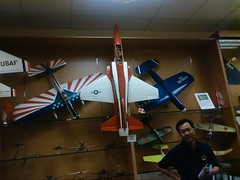 In the early days, the Club flew out of Sembawang Airfield, now Sembawang Air Base. The Club later moved to Seletar Air Base, now Seletar Airport, to conduct its flying operations which it still does till today. Its aeromodelling activitieswere conducted initially at Harding Road at Tanglin, then in 1999 at Air Force School at Paya Lebar and in 2003, at its present location in Seletar Airport.

The Junior Flying Club started off with a fleet of eight Ex-Military Cessna 172, and six Airtourers CT/4A, all handed down from the Republic of Singapore Air Force (RSAF).