A study by National University of Singapore (NUS) Social Work Department has shown that the working poor in Singapore are not getting enough pay to make ends meet. The survey also showed that those who need money want to work and that there are jobs available for them. It has been reported that there are more than 300,000 Singaporeans and Permanent Residents who earn less than S$1,500 a month, excluding employer CPF contributions, despite working full-time.

Poverty is often associated with joblessness, but a large proportion of poor people are actually working. "Working poor" is defined as someone whose income per household member is less than half of the national median per capita household income of Singapore, which now stands at S$1,920 a month. A household is coded as "poor" if its income is less than S$960. This is a relative, rather than absolute, measure of poverty. A household is classified as "working" if at least one member of the household was employed at the time of the survey. Some of the most common struggles faced by the working poor are finding affordable housing, arranging transportation to and from work, buying basic necessities, arranging childcare, having unpredictable work schedules, juggling two or more jobs, and coping with low-status work.

The study cited that 85 per cent surveyed said jobs are not paying enough for them to support a family. Among the reasons is the fact that about 90 per cent of the one million jobs created in the last decade are from the services sector, which observers say are lowly paid to begin with. About 60 per cent of respondents said the government is not spending enough to help the poor, and about half said they are willing to pay more taxes to help the government raise social spending to help the disadvantaged. In Singapore is no recession, in fact Singapore's public budget is healthy, so we have an opportunity where we can take hold of, where the government can lead the rest of us and partner together to do more for the less fortunate here. 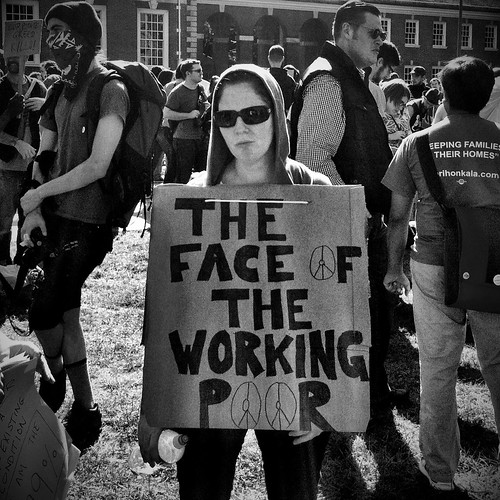