Former military barracks (6 blocks), football field (bus parking) and parade square on Sentosa, previously known as Pulau Blakang Mati (Behind The Walking Dead Island), will be converted into swanky hotel accommodation by Far East Organization (FEO). It was converted in 2005 into a tourism academy by Temasek Polytechnic but the academy was abandoned in 2011. FEO won the bid over three other submissions for the 60-year leasehold hotel site at Artillery Avenue from the Sentosa Development Corporation. The organisation will pay S$32 million up front for the piece land, which is about 4.5 Hectare site with a permissible gross floor area of up to 387,500 sq ft, and a guaranteed sum (S$3.7million/year or 10% of the total annual gross revenue, whichever is higher) every year to Sentosa Development Corp, starting from next year up until the 60-year lease expires. The hotel would be named The Outpost and will integrate two hotels (Movenpick Heritage Hotel Sentosa and Amara Sanctuary Resort) with 700 rooms, set for completion in 2018.

The well known Blakang Mati Parade Square was used by the British and later, by the Singapore Armed Forces Artillery Unit till 1972. It comprised housing for the junior staff of the army, a church, medical complex, football field and also the main parade square which was often used for the army as well as for formal military occasions. The Blakang Mati Artillery Barracks were built around 1904. Maps of the island show the British established forts and gunneries as early as 1860 and the army were stationed on the island in attap structures as early as 1878. 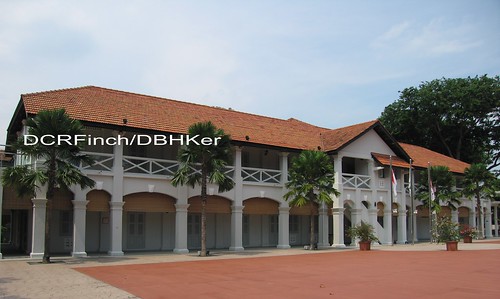 During World War Two Blakang Mati was used as a prisoner-of-war (POW) camp during the Occupation. Following the Japanese surrender in 1945, these roles were reversed and the former captors of WWII became POWS on Blakang Mati and were housed in the same barracks.

The parade square on Blakang Mati was used for many purposes after WWII, from formal military receptions to use as a staging area where military units were given send-offs on their way to battle.

Britain pulled out its forces from Singapore around 1971. Existing military facilities like this Blakang Mati Unit were transferred to the government of Singapore and Blakang Mati became a basic military training ground for the new Singapore Armed Forces.