Ms. Gillard At The Istana

Australia's Prime Minister Julia Gillard is on an official visit to Singapore. She was given a ceremonial welcome at the Istana this morning. Also present was Singapore's Prime Minister Lee Hsien Loong. After the ceremony, Ms Gillard met Singapore's Acting President Mr J Y Pillay. Ms. Gillard is in Singapore to hold security and trade talks with her Singapore counterpart, Lee Hsien Loong. Ms. Gillard reassured that the Republic of Singapore Air Force (RSAF) would be allowed continued access to training facilities in Oakey in Queensland, Pearce in Western Australia and Tamworth in Victoria. 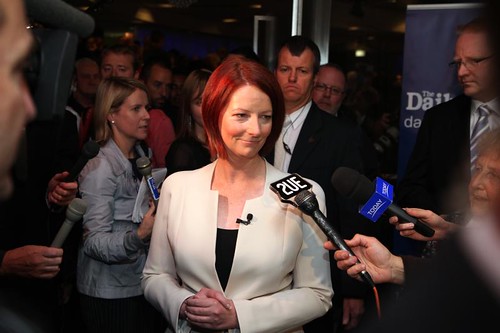 The orchid Dendrobium Julia Gillard named in her honour during a visit to Singapore's National Orchid Garden.

Australia was one of the first countries to recognise Singapore's independence in 1965. Since then, the relationship between Australia and Singapore has remained close. Australian investments in Singapore more than doubled between 2005 and 2010, with the number of Australians doing business in Singapore growing about 10 per cent annually. Singa­pore gets close to a million Australian tourists annually, while Australia receives more than 300,000 visitors from Singapore each year. There are more than 20,000 Australians living and working in Singapore and around 50,000 Singaporeans in Australia, including 10,000 students.