The Singapore Armed Forces (SAF) School of Technical Training at Royal Air Force (RAF) Seletar was officially declared open. The school was setup with the help of Airwork Services Limited, a British company specialising in defence service, and the RAF. The school offers training in 11 aircrafts like the Ex-RAF Gloster Meteor PR.10 fighter. 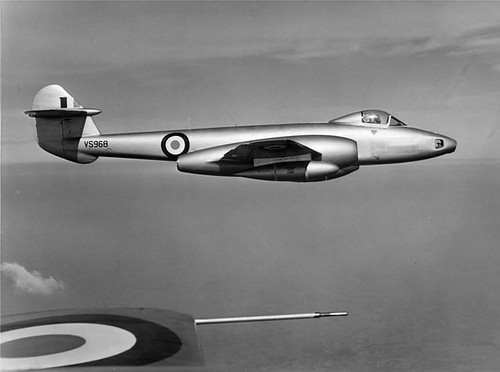 Meteor PR.10 is a Photo reconnaissance version of the Gloster Meteor, first flown 29 March 1950, 59 built for the Royal Air Force. The Gloster Meteor was the first British jet fighter and the Allies' first operational jet. The Meteor was the first production jet as it entered production in 1944. The Meteor's development was heavily reliant on its ground-breaking turbojet engines, developed by Sir Frank Whittle and his company, Power Jets Ltd. Development of the aircraft began in 1940, work on the engines had started in 1936. The Meteor first flew in 1943 and commenced operations on 27 July 1944 with 616 Squadron of the Royal Air Force (RAF). Although the Meteor was not an aerodynamically advanced aircraft, it proved to be a successful and effective combat fighter.

Airwork Limited, also referred to during its history as Airwork Services Limited. Airwork was founded in 1928 by Nigel Norman and Alan Muntz, with the opening of the private Heston Aerodrome in Middlesex. Airwork moved out of Heston in 1935 due to a lack of adequate space and relocated to Gatwick, where it continued with a contract to maintain Whitley bombers for the RAF. In June 1936, Airwork opened No. 11 RAF Elementary and Reserve Flying Training School (ERFTS) at Perth in Scotland, under contract to the Air Ministry. The company developed accommodation and facilities there, and provided aircraft in the form of the de Havilland Tiger Moth. In 1947, Airwork relocated its headquarters to Langley in Buckinghamshire. Airwork continued its flying training role providing elementary, RN grading, Volunteer Reserve (VR) and University Air Squadron (UAS) flying training across its locations initially using Tiger Moths and, from the 1950s, the Chipmunk. During the 1960s Airwork carried out delivery flights of a large number of aircraft were also handled at Hurn during this time prior to delivery for the the Singapore Air Force (BAC Strikemaster).