RAF Tengah is upgraded to become the next new fighter base and it will be Southeast Asia first.

This upgrading work is part of plans drawn by RAF Southeast Asia Air Command. It will move the focal point from Seletar to Tengah. Kallang Aerodrome was be handed back to the Singapore Government for civil aviation.

It will be the home for the Gloster Meteor in Southeast Asia. 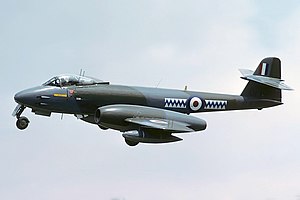 The Gloster Meteor was the first British jet fighter and the first operational jet. The Meteor's development was heavily reliant on its ground-breaking turbojet engines, developed by Sir Frank Whittle and his company, Power Jets Ltd. Development of the aircraft began in 1940, work on the engines had started in 1936. The Meteor first flew in 1943 and commenced operations on 27 July 1944 with 616 Squadron of the Royal Air Force (RAF). Although the Meteor was not an aerodynamically advanced aircraft, it proved to be a successful and effective combat fighter.