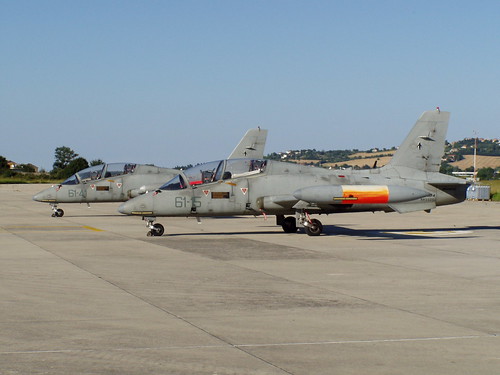 The training program starts May 2012 with the arrival of the first batch of two RSAF's Trainee Pilots at the 61st Wing of ITAF (AIM 61º Stormo) in Lecce (in Apulia Region). The two has just completed their RSAF Basic Wing Course on the Pilatus PC-21 in Pearce (Australia). Four more will go in November 2012 and join the next course. The agreement, developed in view of the delivery to the RSAF in Cazaux (France) of twelve Aermacchi M-346 Master advanced trainer aircrafts, represents a further step in cooperation between ITAF and RSAF.

Our two airmen will join 5 Italian airmen for a 9-months Phase III course.. The Italiain airmen has recently completed their Phase I and Phase II of the Italian training syllabus at 70º Stormo Giulio Cesare Graziani (70th Basic Training Wing) in Latina.

Background: RSAF started collaboration initiatives with ITAF (AIM) which took place in October 2011 with the "Expert Meeting" took place at the General Staff of AMI in Italy. It continued with meeting in Singapore in January 2012.

Note: AMI (Aeronautica Militare Italiano) is the Italian name for the Italian Air Force. It has held a prominent role in modern Italian military history as Italy was among the earliest adopters of military aviation. The Italian air arm dates back to 1884, when the Italian Royal Army (Regio Esercito) was authorised to acquire its own air component. The Air Service (Servizio Aeronautico) operated balloons based near Rome.