150 Squadron was form on this day. The squadron is based in the Changi Air Base with is home SIAI-Marchetti SF.260. The fourteen SF.260 will be used for the basic flying training role. The new aircraft replaces the Cessna 172K which was in service since 1969 which was transfer to Junior Flying Club (Singapore Youth Flying Club, SYFC). 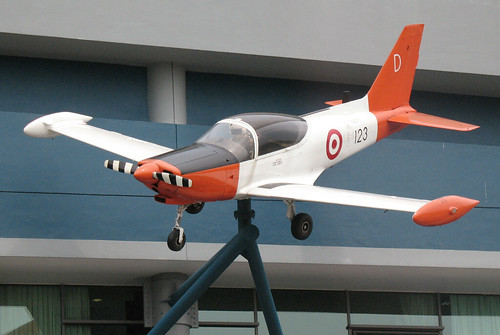 Update: In 1984, the S.211 was added to the Squadron the role of SF.260 was scaled back. In 1993, the fleet of SF.260 and was partly withdrawn from use as RSAF shifted its pilot training programme and entire fleet of S.211 to Australia. SF.260 was then used for Air Grading Flight for initial selection of potential RSAF's pilots.

Update: The A-4 Super Skyhawks replaced the S.211 jet trainers in 150 Squadron, which was responsible for advanced jet training for pilots. In 1998, the 150 Squadron along with A-4SU Super Skyhawk move to Cazaux, France.

Update: With the setting up of RSAF Air Grading Centre in Tamworth (Australia) in 1999, the remaining 19 airworthy airframes were phased out and put in cold storage in 2000. The Republic of Singapore Air Force officially transferred six SF.260 trainer aircraft to the Indonesian Air Force in a ceremony held at Halim Air Base in Jakarta (Indonesia) on 5 July 2002.