Lim Yew Hock was Singapore’s second Chief Minister from 1956 to 1959. He is known for suppressing the communist movements and leading the all-party delegation that won internal self-government for Singapore. As Chief Minister, Lim was instrumental in negotiating with Britain the final arrangements for internal self-government in Singapore. However, Singapore under Lim Yew Hock, the State Treasury was emptied. Singapore had an incipient corruption problem under the British. But under Chief Minister Lim Yew Hock (1956-59), some ministers and civil servants were even more corrupted and the rot looked like a spreading wildfire.

He began to suppress the anti-colonial activists and communists. He banished two Chung Cheng High School teachers and dissolved the Chinese Middle School Students’ Union. With the support of the British Governor and Commissioner of Police, troops with tear gas and helicopters were brought in to end the riots. Many key pro-communist union leaders in the People’s Action Party (PAP) including Lim Chin Siong and Devan Nair were detained under the Public Security Act.

He dissolved the Labour Front and formed the Singapore People’s Alliance. However, his tough measures also ultimately led to his political downfall. It alienated a large portion of the Chinese-speaking electorate and this enabled the PAP to win the 1959 general election and form a new government of Singapore. The other reason for his political downfall was that Christmas Island was administered by Singapore at that time. He was the person that sold Christmas Island to Australia for only 2.5 million pounds. That incident made Lim Yew Hock really unpopular.

He retained his seat in the Legislative Assembly by winning at Cairnhill instead of re-running at Havelock, beating incumbent David Marshall, the seat which he held on till 1963.

In 1964 Lim was appointed Malaysian High Commissioner to Australia, based in Canberra. In June 1966, he went missing from Canberra. A massive police search was unsuccessful in locating him. His wife and daughters went on national television to plead for his safe return, and the then Malysian Prime Minister, Tunku Abdul Rahman, made a personal appeal from Kuala Lumpur and sent people to Sydney to help in the search. It was discovered that Lim had flown from Canberra to Sydney under the name "You Hawk”. It was also revealed that he had an ongoing association with a 19-year-old Kings Cross stripper, Sandra Nelson. Then, just as mysteriously as he had disappeared, Lim turned up after being missing for ten days. A passing stranger had discovered him ill, wandering on a Sydney street, and took him in. The stranger drove him to Canberra to return him to the High Commission.

On the same day that Lim returned, an Australian newspaper was able to track Sandra Nelson down and interviewed her. Sandra said that she and "Hocky" were good friends who often got together for a chat and a "good" time. 18-year old Sandra is already a celebrity stripper where she will go the around the city doing publicity stunts by ripping apart a bikini in crowded areas bare her firm breast. 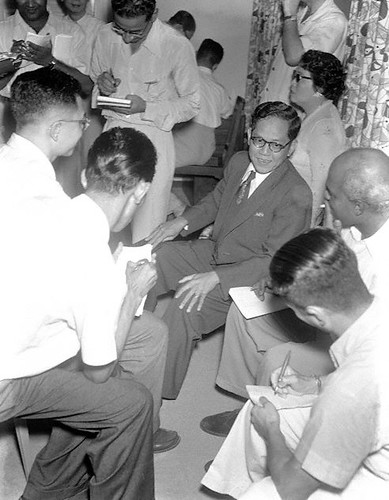 In 1968 Lim Yew Hock retired to Malacca and live a quite life. Later Lim became a Muslim and change his name to Haji Omar Lim. He died in Saudi Arabia on 30 November 1984 while performing his Hajj (Pilgrimage) in Mecca.